The design problem at hand is actually very small, just two user interface controls – a slider and a button – but this post is long.  That’s kind of the point, to illustrate that even simple things involve a non-trivial amount of “discussion” with the situation at hand.

I’m building a scope management tool for agile teams.  This post is about one very small part of it: the portion of the user interface that controls zooming in and out.  Like Word, Excel and virtually every “document” centric application, mine will have a slider near the bottom right corner to let the user zoom in and out.  But unlike Word and Excel, my app suffers from two unique design constraints: 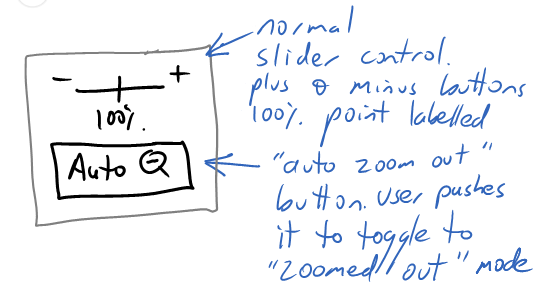 My Conversation with the Situation

Here’s how it unfolded as I did the coding.  In the left hand column I’ve listed the actions I took.  In the right hand column, I have represented the situation’s “back talk” – the unexpected things that I learned as I went along.

When you click the button, the app jumps to zoomed out, and the icon changes to this:

Click it again, and it toggles back to the first state (with your original zoom level, whatever it was)

[Update 5 months after initial posting: I have made more changes since writing this blog post.  The conversation with the situation continued, even after I thought it was finished 😉 ]

That’s it.  My conversation with the situation (or my internal design monologue, if you prefer) in designing one small part of the UI.  I hope it helps to demonstrate several points:

Was I being too picky, doing all this for just two UI controls? Well, this example is from a personal project.  In my day job, I don’t recall putting so much attention into UI design – because that is not the priority for the business customers I deal with.  Instead, most of our “conversations with the situation” relate to business logic. Those conversations are both more important, and more intricate, than the example on this page.  Unfortunately they’re much harder to write about because they’re so abstract.

What about communication problems? Yes, in most real-world situations there may be information that falls through the cracks between the customer and the developer.  This makes it all the more important for the developer to be alert to possible gaps and inconsistencies.  I.e. to continue the conversation with the situation as they code the solution.  In the example on this page, I am both the customer and the coder, so there were no communication gaps – and yet look how many action-reflection cycles were still required even after perfect (lossless) communication!

Isn’t this just a lack of foresight on my part? The suggestion is that, if I’d had better foresight when thinking through the design, less “conversation” would have been needed during coding.  Well, yes, and no.  “Yes” because, if I’d had perfect foresight then the conversation would indeed have been reduced.  But “no” because no-one actually has perfect foresight.  All the resources I quote here, and doubtless many others too, confirm that this kind of “conversation with the situation” is completely normal and necessary for designers and other professional people.  If there is anything usual about this page, it’s simply that software engineers don’t normally write down examples of their thought processes.

Does it take more time, and so cost more money? Maybe, but probably not as much as you might expect.  Why?  Because good quality conversations with the situation, at coding time, tend to reduce the defect count later.  So the conversation pays for itself to some degree, in terms of fewer problems later on.  It also improves the overall value of the software, by improving its usability and fitness for purpose.  After all, which is really more expensive – a $100k system that your staff hate and can’t use efficiently, or a $120k system that makes their jobs efficient and satisfying?

I received some lovely feedback from a customer, after we ran a project that included lots of conversations with the situation.  The customer’s system administrator said:

Almost every day, another staff member asks for access to the system.

Isn’t that great?  A custom-built business application so satisfying to use, that it “went viral” amongst the staff.  What a change from clunky systems imposed on users against their will.

One comment on “Conversation with the Situation – a Software Example”